Ripped Power Ephedra Diet Pills by American Generic Laboratories contains the powerful combination of Ephedra and Chromium Picolinate that made the original Ripped Fuel product line so popular in the weight loss and body building community. If you've been mourning the loss of what was a very powerful Ephedra product, join the thousands who've found the Ripped Power Ephedra Diet Pill as a successful OTC weight loss solution. 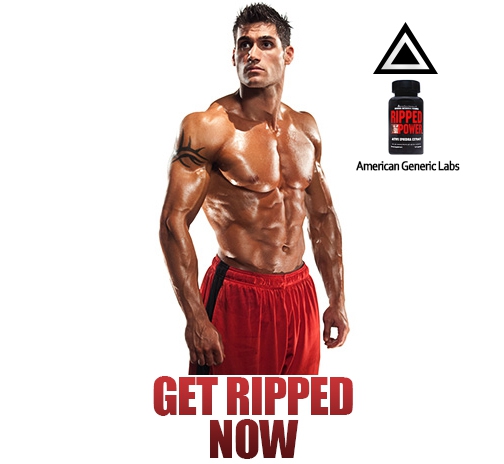 Ripped Power will give you the "ripped" physique you want by:
* Boosting your metabolism
* Utilizing thermogenics that turn your body into a fat burning furnace
* Suppressing your appetite
* Utilizing both natural herbs AND the best scientifically created supplements
* Increasing your energy
* Helping your body burn fat instead of muscle

Don't be fooled by the non-ephedra pills that claim results like this. They just don't deliver. No other diet supplement has been studied as rigorously as ephedra, and none has ever shown the consistent result of massive fat loss. How can it do all this?

The combination of ephedra extract and guarana seed extract will suppress your appetite, increase your energy, and blast your metabolism through the roof. Through the power of thermogenics, Ripped Power will increase your body temperature, something you can feel from the very first use, turning your body into a calorie burning furnace. You will burn calories all day long as if you were working out. You won't need to change your routine at all to see the effect, but if you do pair Ripped Power with a diet, it's ability to suppress your appetite means that while you're burning more calories, you'll have the desire to eat fewer. And instead of feeling sluggish and ineffective, you'll have more energy than ever before, all while working towards your perfect body.

But how can you be assured that you'll be burning fat and not muscle? Here at American Generic Laboratories we formulated Ripped Power for athletes, and Ripped Power is the choice of bodybuilders because it's combination of Chromium Picolinate and L-Carnitine ensures your body is using fat for fuel. You worked hard to get the muscle that you have. Your body doesn't want you to carry extra muscle, and will use any opportunity to shed it. Losing weight ordinarily means an inevitable loss of muscle, but not with Ripped Power.

The original Ripped Fuel was so popular precisely because of this carefully balanced formula that you couldn't find anywhere else. Well, it's gone, but luckily Ripped Power has combined the key ingredients to make a supplement just as powerful.Only Ripped Power's proven formula has been used by millions to help achieve that chiseled ripped look.

You've been looking for this formula, you thought it was gone forever and it's back! Get Ripped Power today.

Ripped Power contains ingredients to help you burn the fat and keep it off, and Ripped Power is 100% Guaranteed.

Unlike Ephedra Free products that promise much but deliver little, Ripped Power is the real deal. Say goodbye to broken promises and failed attempts with inferior Ephedra replacements and say hello to Ripped Power.

Directions: As a dietary supplement, take 1-2 capsules 2-3 times per day, preferably with food and water.

I loved this product
I used to take Ripped Fuel which I absolutely loved. I was so mad when due to the stupidity of a few they took it off the market. So when I found Ripped Power I was very happy. I run about 5 miles a day and it gives me the energy and power to run this distance. I would like to also see the price reduced if at all possible. Great product though and would definitely recommend it. Review by labourdaddy / (Posted on 9/15/2014)
MONEY WELL SPENT!!!
LOVE THIS STUFF!! gave me the right kick! Review by Tom / (Posted on 8/27/2014)
Recommend
Closest I have found to Ripped Fuel! Highly recommend. Notice improved energy! I have tried other products and always come back to this one! Definitely a yes! Review by DeDe / (Posted on 4/8/2014)
Totally
Works just like twin lab Ripped Fuel.... Review by Frank / (Posted on 3/24/2014)
Great energy
After a 10 hour work day I can go to the gym and get a great work out in.
Speeds up metabolism, great for weight lose. Give me the energy to get me through the second half of the day Review by David / (Posted on 3/18/2014)
Awesome product
Great product! highly recommended, lot of energy and burning fat like a champ! Review by LUIS / (Posted on 3/15/2014)
Excellent supplement to diet and exercise.
I have been using Ripped Power for over five years now and I have experienced great results. It really helps boost my energy, suppress my appetite and helps me to think clearer. Review by Vincent / (Posted on 3/13/2014)
one of the best products on the market today
like other reviewers, I used to take Ripped Fuel almost daily. This is a good substitute, but I still miss the original. take with food, or a full glass of water. do not take after 5pm. follow directions and take consistently, every day. combine with routine workouts and decent diet, and you will be impressed. By the way, this is my 5th reorder! Review by steve / (Posted on 3/12/2014)
Amazing Stuff
Been using this product but must drink water with the pills.
Amazing at the gym. Review by Alex / (Posted on 3/11/2014)
Energy
I love the energy that I get from Ripped Power...also curbs my appetite Review by Theresa / (Posted on 3/9/2014)
Best way to get ripped
Used Ripped Fuel a bunch with great results, but since it's been removed from the shelves this has been the ticket. Get yours today so you can get ready for that summer body you've always wanted... Review by Bulog / (Posted on 3/7/2014)
Replacement for Ripped Fuel
This product is the closest product that you can purchase to Ripped Fuel, which was removed from the market years ago. This product will increase you energy and reduce your hunger for hours. It is best to take at least 6hrs before bed time because it will keep you energized. Of all the product on the market at this time, there is nothing better than Ripped Power and I have wasted my money on many of the others. Review by Tough2U / (Posted on 3/6/2014)
Great Product
I have had great results with this product. Improved energy and muscle mass with very little side effects. Review by Dianna / (Posted on 3/6/2014)
Just what I need
I have shopped around and tried a few other similar products and don't think that they compare to Ripped Power in cost or expectations. I don't feel jittery when I take it and I have plenty of energy for my workouts that can last over 2 hours. I recommend it for anyone that is needing that extra boost in their workouts. Review by Steph / (Posted on 3/6/2014)
Great for that extra boost
This product is amazing at giving you the extra boost you need to fight through a long workout. I run 10 miles a day on my treadmill and I take two first thing in the morning and two in the middle of my run. This is the only product that I have found to do that. A short story is one day I found an old bottle of ripped fuel and decided to take one. I felt absolutely amazing afterwards and had energy for days. When I ran out I went ahead and ordered them again and to my surprise the ingredients had changed and they didn't do much. I discovered that the active ingredient was ephedra and a lot of companies were taking it out of their products. I was sooo happy to find the original ephedra pills on this site. If you ever took ripped fuel that is what this product is just a different name. Review by Talin / (Posted on 3/6/2014)
It Just Works
This is just like the formula of the original Ripped Fuel. It is very effective at shedding body fat coordinated with a good exercise program and lots of protein in the diet. It provides me with lots of energy and keeps me focused. I love it. Review by Eddie / (Posted on 3/6/2014)
Great
I used to take Ripped fuel back in the day and was a little hesitant to try ripped power. But to be honest it surpassed my expectations. Ripped power definitely get the job done. Ive lost 10 lbs on it so far and Im almost ready for my competion!!! five starts !!! Review by Frank / (Posted on 3/6/2014)